When we were in Croatia, we all adapted a mentality that we were going to see as much of the country as we could. It meant that we didn’t spend much time relaxing by the beach, but that we had the opportunities to see some of the most beautiful places in all the world. One of those must see locations for us was Plitvice National Park. It is one of the oldest National Parks in Southeast Europe, and is the largest National Park in Croatia. After the previous days visit to Krka National Park, just south of where we would be going today, it was a few days filled with the majesty of waterfalls.

We came into the park through the south entrance (Entrance 2), and parked up at the top by Entrance 1. We found it easier to get through the whole park this way. Parking was easy to navigate (until we left later and didn’t know where to pay for parking… many laughs ensued), and this location made it easier to see the whole park in a loop. From the parking area, we crossed a beautiful bridge over the top of the road and went to the information desk to purchase our tickets for the park. With your purchase of a ticket, you gain access to taking one of three ferry crossings in the park and also taking one tram ride from any of the three stations. If you take the loop we did around the park, you should be just fine. I don’t think they really care if you take multiple ferries, which is nice, but I would try to limit my time on them so you can get the whole walking experience.

Plitvice is probably in the Top 10 most beautiful places I have EVER seen. Hundreds of waterfalls thundering around you; the sounds of the birds, the running water, looking into the deep blue water and watching the fish swim in the many lakes and ponds that make up this national park just stun your senses. The air here is humid and full of life, very different from being on the humid, yet arid coastline. We got to the park around 8:30am from Trogir, the mist was just rolling out of the valley. It wasn’t as warm as we thought it would be at 0 degrees C, but it warmed up nicely throughout the day. The first waterfall we saw was Veliki Slap. Couldn’t have have been a better introduction to what we would be seeing for the day.

The walkways here are so breathtaking. You are walking in this world of waterfalls, wooden walkways, and lush vibrant forests. It literally feels like you’ve found Eden. Fall was just starting to show in the colors of the trees, the only way I can think of describing it would be serene.

One of my favorite parts to go in the park was the cave system: Šupljara Cave. Many steep stone stairs lead you up into this giant stone cave. The walkway goes right though where the water comes down in the spring. You can even access one of the caves and walk pretty far back into it.It was very cool and damp here, and you could really appreciate the color of the water even in the darkness. 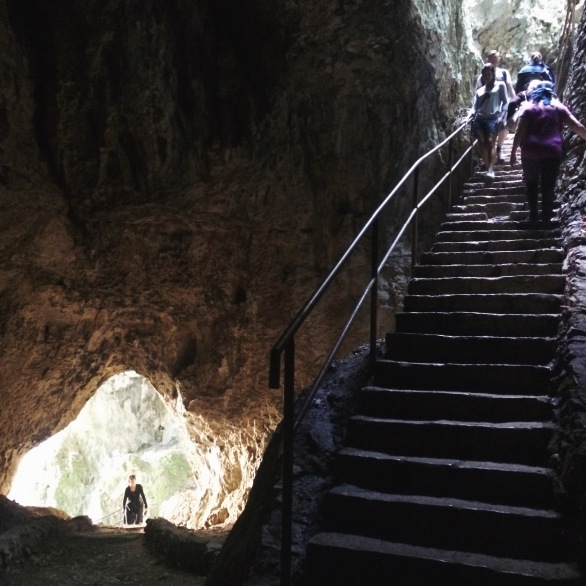 After the cave, we made our way up to the “upper lakes” section of the park, so that we could take the P3 ferry stop to the P2 ferry stop. Seeing as we only had the day to explore, we decided it would be a good way to beat the crowds (which actually came around noon). The walk toward the ferry was filled with more scenic views, running water, and of course, waterfalls. 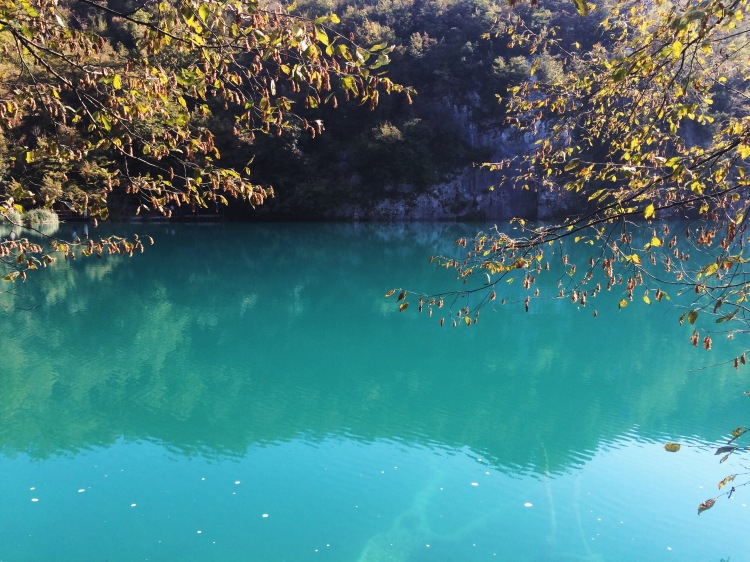 The wait for the ferry wasn’t long, maybe 15 minutes or so. We watched the ducks playing in the water and had a bathroom break. There were some shops and restaurants, but nothing too crazy. At this point in the day we were very thankful that we came during the off season. I also really enjoyed this walkway made of trees.

It was then a hop skip and a jump onto the ferry towards the Upper Lakes section of the park. Upon doing some research, the boats that they operate here in Plitvice are electric (go ecotourism!). Once again happy to be sharing the ferry with only a handful of people thanks to some good timing; we chatted and enjoyed our leisurely jaunt across the lake.

After getting off the ferry, the crowds really picked up. It was getting to be a bit later in the day, and while I don’t imagine that the crowds I was seeing were any more than usual, we hoped that we could further avoid them. We didn’t, but we still enjoyed the scenes along the way.

It was now around 13:30, and we were all ready to ditch the crowds. It was easy enough to find the right bus… ok well that’s a lie because I ended up getting super confused and taking us all the way back up to the end of the bus route. This costed us about a half hour, but oh well, what do you do (: Still working on my guiding skills!

After the wrong bus adventure, we made it back to the car with ease. We didn’t realize the hardest (and funniest) part was yet to come. We followed the signs out of the parking lot down to the “payment” section of the parking lot (or so we thought), and were brought to a one lane, two way road with an arm crossing our path. We inserted our ticket, and it told us to pay. A young man then came across the intercom and told us to walk over to the pay station… After a quick walk of shame over to the pay station, we laughed our way out of the park towards our next country: Bosnia & Herzegovina.

The drive from Plitvice National Park to Bosnia wasn’t too bad at all. It is mostly rolling hills, small towns, and open country. Many little fruit and vegetable stands along the roads. It only took us 45 minutes or so to reach the boarder near the town of Bihać. It took us only minutes to cross, and there was a long line on the other side coming back into Croatia, about 50 cars or so. Now it felt surreal, we were in BOSNIA! I had read about the town of Bihać in my Rick Steves guidebook, gifted to me by my mom before embarking on our trip. He had said that it was a neat way to get into Bosnia and grab a bite to eat.

We made our way through the Bosnian countryside. Many old buildings, some with bullet holes in the sides; remnants of the Homeland War. Some of the buildings that had bombed or destroyed by fire, still stood in their places: reminders to those that war was not so long ago. We passed a couple of beautiful mosques and followed a small river to the city, the River Una.

The city was not bustling, at least not with the same vitality as that of the Croatian coastal cities, but life was happening around us. It seemed as many of the local people were preparing for winter, as many of them could be seen outside chopping large piles of wood. We made our way toward the city center. Upon driving the loop around the downtown area, we picked a parking place and started exploring.

One of the first places we visited was just off the town square. At the time, we could not find any information regarding what the site was called, but upon some investigating, I have found it to be called the Captain’s Tower (Kapetanova Kula).

CAPTAIN’S TOWER
Although it is one of the oldest historical landmarks of Bihać, its date of birth still hasn’t been determined. Since its constructors hadn’t left any information about this building for future generations, historians were able to determine approximate time period it comes from: late Croatian and early Ottoman. As many buildings in Bihać, Captain’s Tower has its own little history. According to the theory by H. Strauss in his book “Towers of Bihać”, Captain’s tower was built in 1205. and it was one of the four towers, three of which were destroyed in 1201 – 1202. According to the legend that contains bits of historical foundation, Captain’s Tower and fortified Bihać, saved Hungarian King Bella the Fourth from Tartar cavalrymen, who had chased him to the walls of Bihać fortress. As a token of his Royal appreciation, King Bella the Fourth proclaimed Bihać a free town. When Austro–Hungarians came here they turned the Captain’s Tower into a county prison. For long period of time, ever after Bihać grew out of its walls and became an urban center, Captain’s Tower was used only as prison until it was given to the Regional Museum in 1959. Building was completely adopted and turned into Museum, where you can see many artifacts from Illyrian and Roman period.

From the Captain’s Tower, we headed down the street into a local park. There were a few restaurants along the bank of the river Una, with people walking, sitting, and talking around them. The park had long walkways lacing though it, and with the warm afternoon sun breaking though the trees, we saw many umbrellas hung upside down to catch the sun. 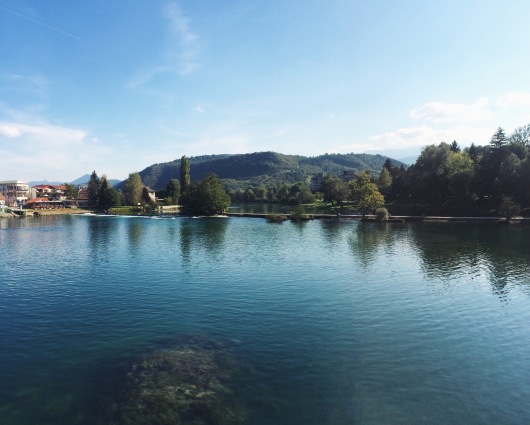 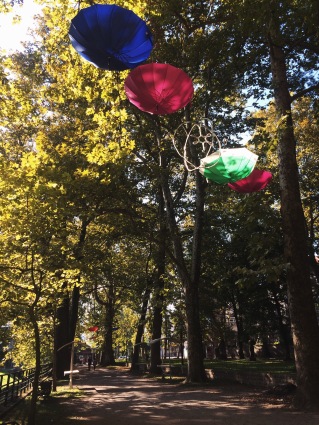 Umbrellas in the Park

Now it was time for the real reason of our trip; to try some Bosnian cuisine. After traveling all day and exploring Plitvice, we were HUNGRY! We walked back toward the town center and started looking at the menus along the street, we ended up choosing this restaurant called: Telovnik Sofra. It was exactly what we were looking for; authentic, locally owned, played traditional Bosnian music, and had the nicest waiter. Mom and I ordered some Bosnian Chardonnay to go with my lamb, fresh vegetables, and potato wedges. All the food was decadent, and I hope I get the chance to sample more Bosnian cuisine in my future.

After our scrumptious meal, it was time to head back to Trogir. We admired the scenery of Bosnia for the last time, and reminisced about how lucky we were to get to be here.