Even though I’ve spend a good chunk of my life engrossed in the beauty of Washington State, I had yet to experience the true “west side.” Filled with rain-forests, waterfalls, and a multitude of adorable small towns, I was ready to explore the Olympic coast.

So, we packed up the night before (well mostly) and headed south from Bellingham over to the ferry for Port Townsend near the city of Coupville. Due to an unfortunate directional foul up by yours truly, we ended up missing the ferry we intended. It wasn’t the end of the world by any means. Instead, we were able to relax, take a bathroom break,  and 30 minutes later, we boarded the next ferry. 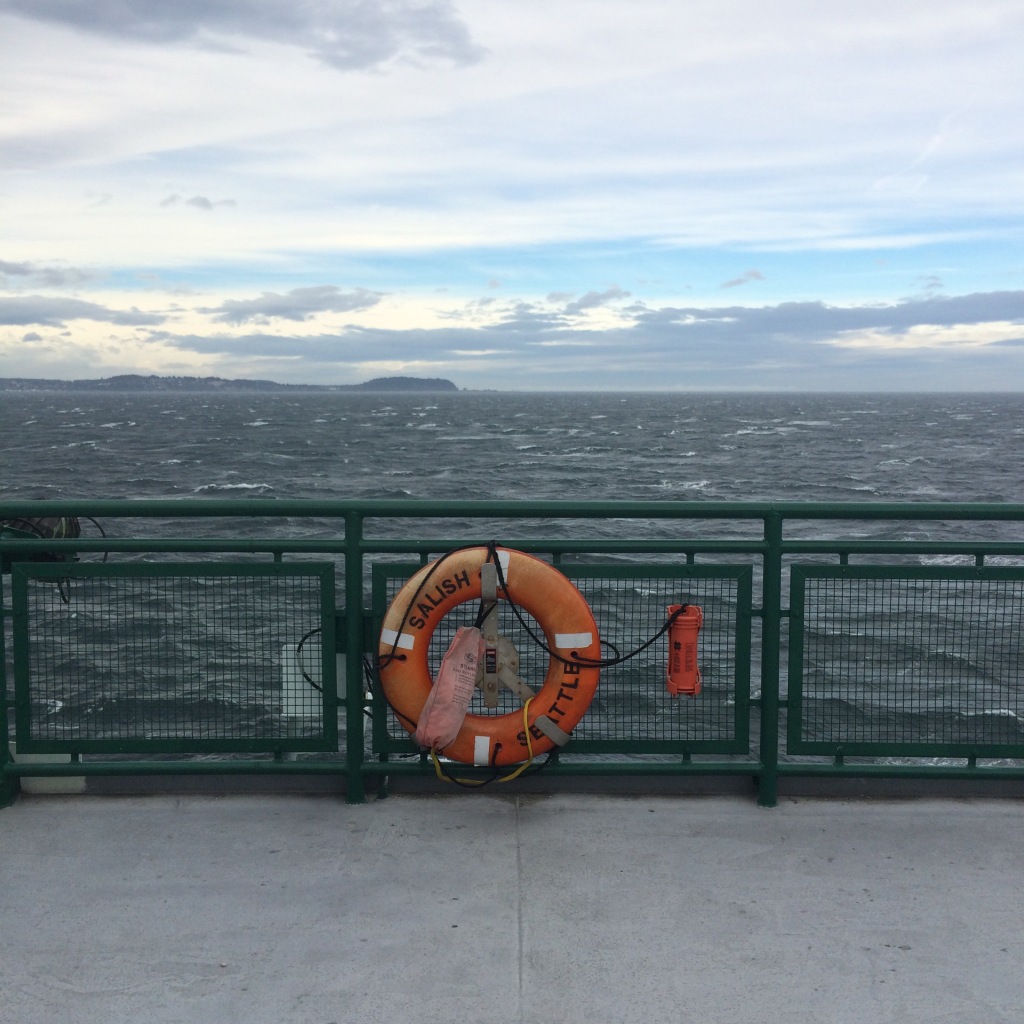 On board the Salish.

Looking into the adorable town of Port Townsend.

After making a quick stop for ice cream at Elevated Ice Cream we headed down the road to Fort Worden. Upon arrival at Fort Worden, I purchased my annual Discovery Pass at the main office, and we headed to explore. While I didn’t take too many photos, the area is really beautiful. The day we were there, the wind was blowing pretty hard, but it was still a nice fall day. The state park has a great variety of camping areas that would cater to almost any camping style. They also have a lot of space (as in land mass), which makes for a neat place to visit even if you don’t plan on staying the night. Definitely a place to check out if you are ever looking for a fun microadventure. We ended up heading to the Point Wilson Lighthouse and exploring around there a bit. There are a bunch of really beautiful beaches and the history is very interesting and old. We even saw some men ocean fishing from the shore.. wonder what they were after. 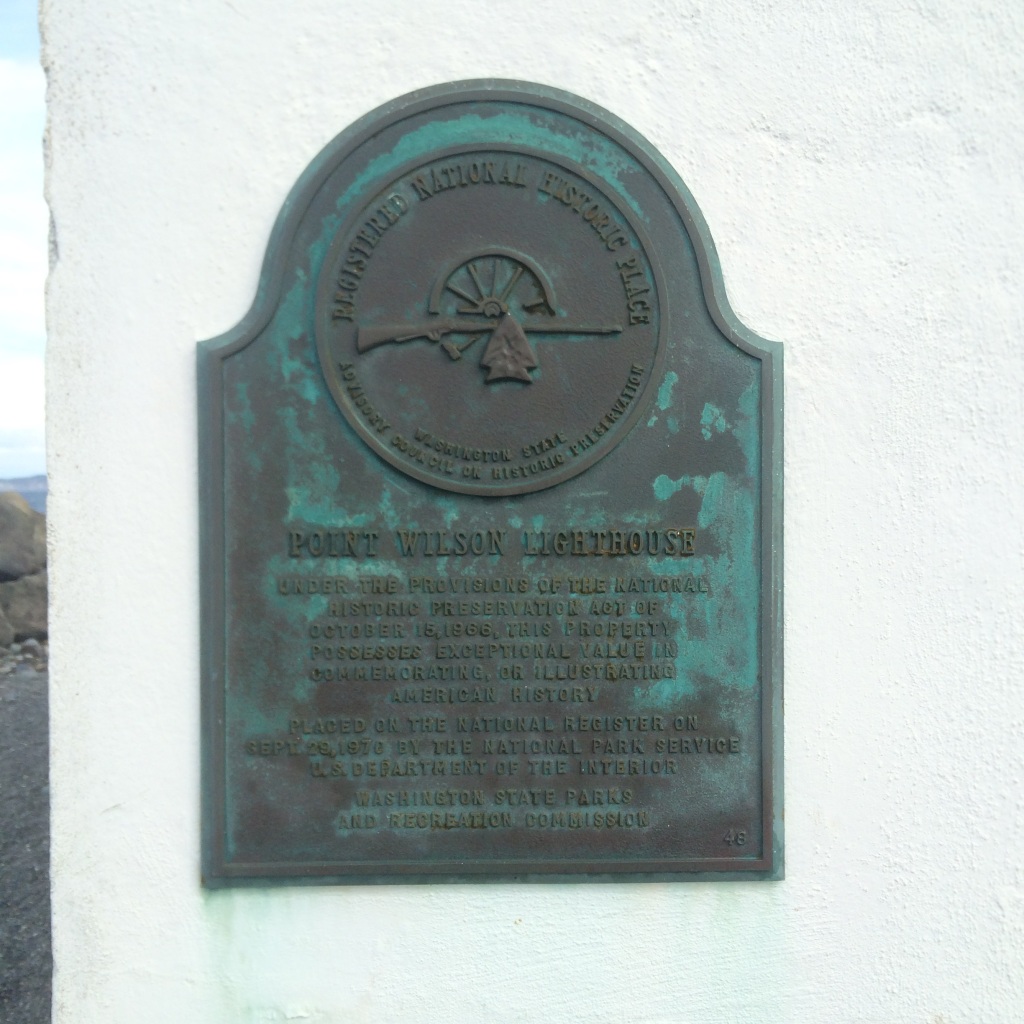 After making this quick stop, we were off to the Elwha Campground! The drive over to the Elwha valley is very pretty. Lots of small towns and businesses along the way. We didn’t stop at any because we were just wanting to get there and start exploring the forest. It only took about an hour/hour and a half to get there from Port Townsend.

Upon arriving in the Elwha Valley, we decided to check out the campsites. We drove through the adorable little Elwha Campground and picked out a couple of our favorite spots, based on what the weather could be like (which was RAINY), and decided to go exploring up the road farther before setting up camp. 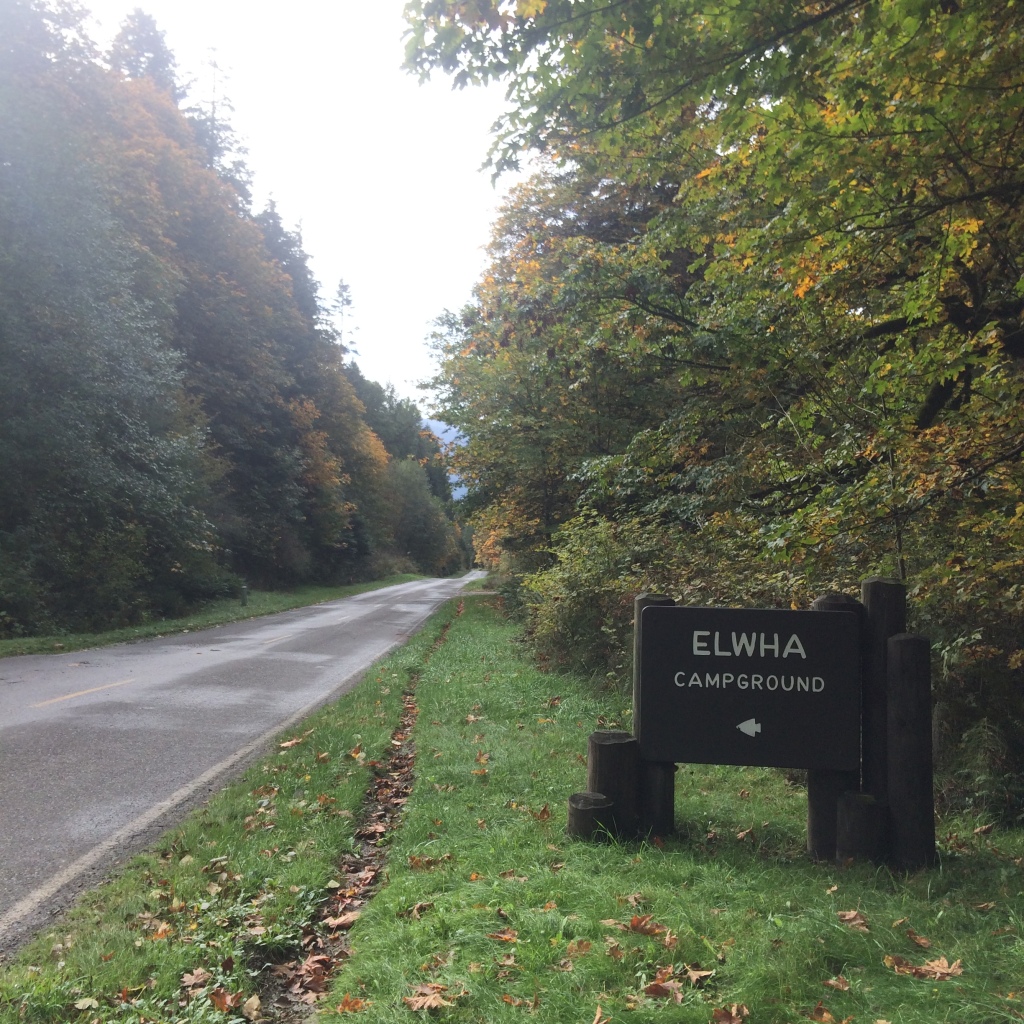 Sign for the Elwha Campground in the Olympic National Forest.

Just a couple miles up the road, was a turn out for the old Elwha Dam, which was removed in 2011. From reading, I didn’t see quite how big of deal the dam was, until seeing what taking the dam out really meant. There was a lake that took up most of the valley due to the dam, and with it’s removal to restore Salmon habitats, has now created a vast and recovering river bed, along with a clear blue flowing river.

Views of the valley from the old Elwha River Dam

Looking down off the old Elwha Dam to the river

From there, you can continue to drive up the road. It was stunning. The fall colors were in full swing and there was no one on the road with us. Seeing as it was nearing the end of the camping season, the area was very secluded and nice. There really isn’t a bad time to go and visit a National Park. We ended up driving about another 10-15 minutes up a steep windy dirt road until we came to its end, where a trail-head and a nice portapotty where (yay for nice portapotties!). Upon looking at the trail distances and how much time we had; decided, “What the heck?! Lets head to some hot springs!”

Fall colors were falling all over the trail

The trail to Olympic Hot Springs was very relaxing. It’s very wide for the most part, and really isn’t steep at all. It was minorly uphill most of the way, but it sure is gorgeous. My favorite feature of this trail was the abundance of beautiful bridges that were throughout it.

One of the first bridges we crossed. Very nice suspension bridge!

Make shift bridge on the side. Not a necessary crossing, but an entertaining one!

Redwood Bridge. Seriously one of the coolest bridges I have seen.

After passing an old sign for the hot springs campground and seeing plumes of steam rising from the valley floor up into the trees, we started to see hot springs. Now, apparently, there is an actual sign and place for the “hot springs” but they are kind of scattered out on both sides of the trail. Many have been dammed up at their water source with rocks to create nice pools for lounging. We walked up and down the trail looking for one that was up our ally, and should you decide to do this adventure yourself, know that you have plentiful options.

After picking one, it was time to get in, and get comfortable! 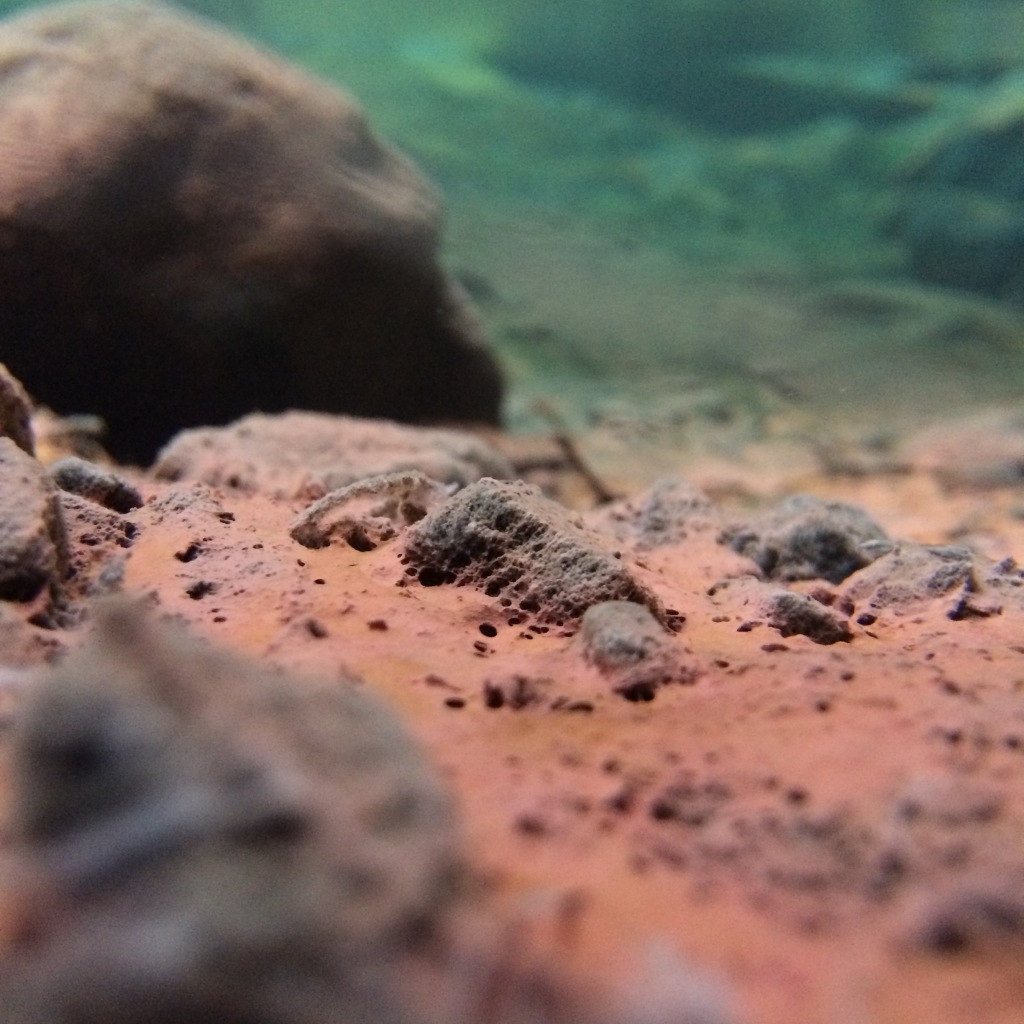 Underwater views of the pink algae that forms naturally in the hot springs.

Watching the steam rise into the forest from our own little hot spring.

We stayed in the hot springs until about dusk, and then decided to head back. I would caution not doing this if you don’t have a headlamp or some-kind of light like we did because it gets DARK. Then it was time to get on back to the campground and set up in the dark!

It rained during the night, but not enough to keep us awake after a long day of adventuring! But man was it raining the next day! Got up and ate breakfast (and coffee of course).

Coffee is a must have. Not to mention, HOW CUTE IS OUR LITTLE STOVE. I’m obsessed with it.

After breakfast, coffee, and clean up, it was time for some more exploring. So we headed to the park entrance, and found a short trail to Madison Falls. The trail is short, and beautiful, and again, has nice bathrooms!

Madison Falls
Now I won’t tell you that there IS a troll cave around here, but there just might be one.. check it out.

Before deciding our next step, decided to enjoy the rain-forest views for a second.

Seeing as we had the entire day to kill, and it was early yet, we decided to go rogue, and just pick a trail that looked interesting, so we suited up in our best rain gear (which wasn’t enough actually), and headed off to find a trail.

This is the trail we decided to go with:

Super informative. I know. Which exactly why we decided to take this trail up… 7 miles, in the pouring rain. 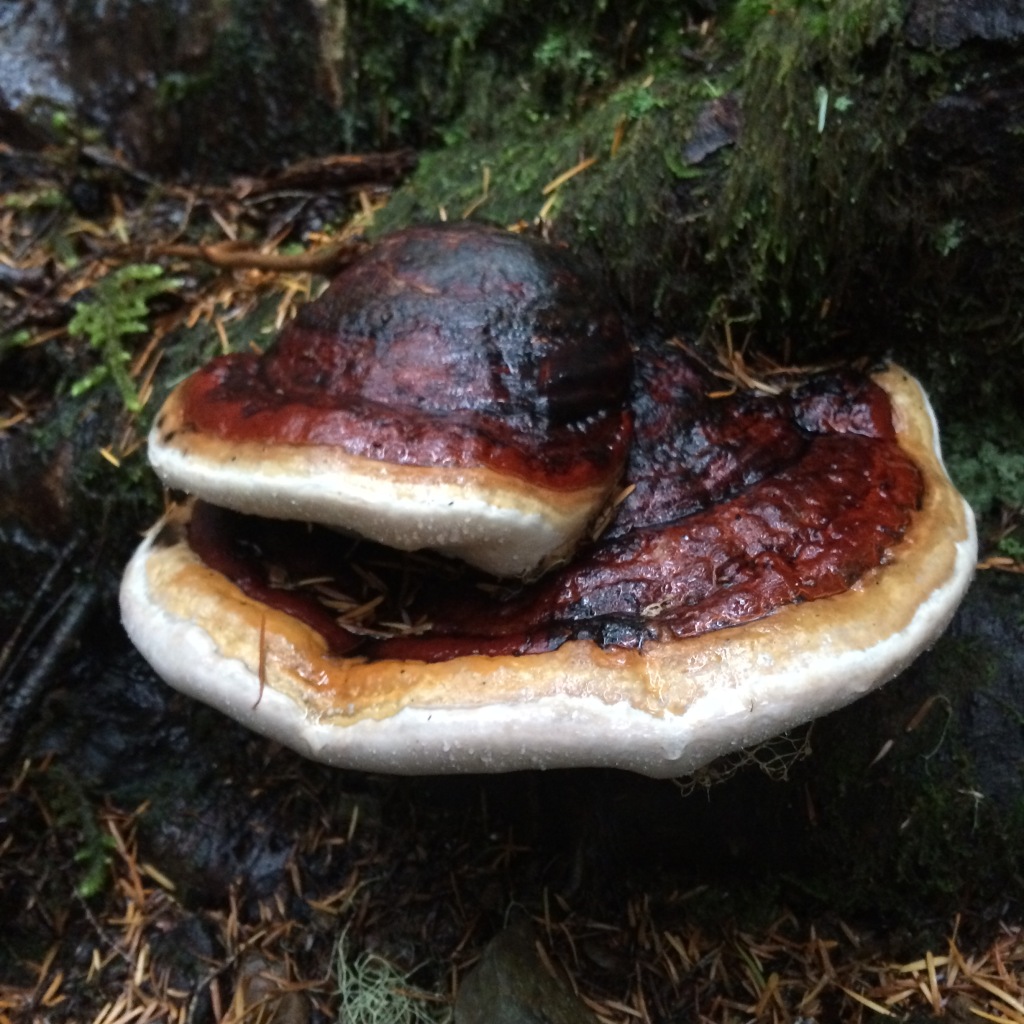 The never ending forest. Or so it seems.

This hike was definitely the WETTEST of my life. Upon returning to the car after around a 14 mile trek up and down, we were both cold and tired, and yet, still fulfilled. This hike remains one of my favorites, probably because it was literally such an uphill struggle, the rain, and the feeling of literally being 7 miles into the middle of nowhere up a mountain. It’s some pretty cool stuff. After this rain soaked adventure, it was time to find some food, and a laundromat so we could dry some pretty soaked gear.

It was time for our third and final day in Olympic National Park, and we weren’t going to go easy. We decided to go and check out Crescent Lake, about a 20 minute drive from our campsite.

Views from one of many pullouts to see beautiful Crescent Lake

I chose to include this picture in this post because this is the color of the water in Lake Crescent. STUNNINGLY BLUE.

After driving around, we decided to stop at one of the ranger stations and do the Mt. Storm King Trail. The trail is not a breeze by any means, especially after the wet grueling day we had the day before, but it looked like we were going to have nice weather, so we bit the bullet and decided to test our legs. It’s about 4 miles of pretty intense incline. Through the forest floor and then to the mountain tops; magical is the only way to describe it. 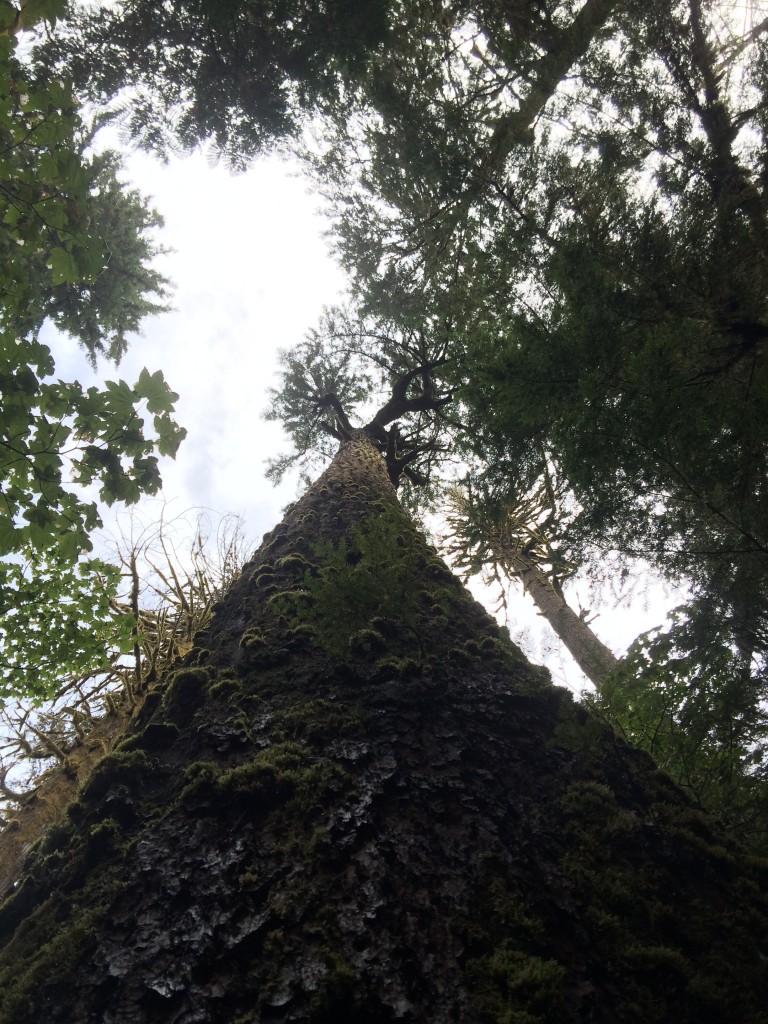 Looking up the trunk of a giant tree

Stumbled upon this adorable creature. If you haven’t noticed, I love slugs.

I can tell you that this trail goes UPHILL. Devin in currently ahead of me in this photo and that you WILL have to use some ropes to reach the tallest viewpoint. Which is totally worth it by the way, it’s an extra half mile, but you’re already up this high anyway!

In the end, we reached one of the tallest points (after trying an even higher route unsuccessfully).

After some rest at the top and time for some photos, it was time to descend. This time around we did not take our time on the way down. What took us some three odd hours to climb and explore, took us about 45 minutes to get back down. Let’s just say there was definitely some running! With all the time we saved on the way down, there was time for one more stop before heading back to reality: Marymere Falls.

In the end, this was an absolutely wonderful trip. We had an absolute blast getting to explore this great rain-forest, even though we have about 60 more miles west to travel to get into the “real rain-forest.” Great workout for the legs, and for the heart. We know that while we did have one epic adventure here in Olympic National Park, that there are many more places to discover here.

Follow Make Trails With Mack on WordPress.com
Join 1,873 other subscribers